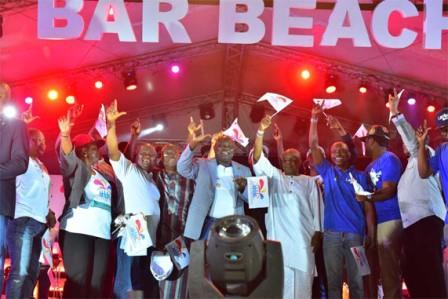 This year, the One Lagos Fiesta will begin on the 24th of December 2019 in an atmosphere of entertainment, lights and fun events; created to foster an atmosphere of commerce & culture, togetherness and happiness among the people of Lagos State.

The idea is to transform 5 key districts within Lagos State into tourist and holiday destinations for 8 days of fun and beyond as millions of people celebrate the holiday season across the megacity.

From the first day they auditioned at the Ikeja centre, it was clear that these youngsters were special. As they twirled and spun around on their unicycles, it didn’t take the judges long to hand over the golden ticket to GKB Unicyclists as qualifiers for Lagos Grows Talent, the talent hunt initiative of One Lagos Fiesta.

For the past three years, Lagos Grows Talent has been a major highlight of the annual fiesta- not only because of the cash prize it awards the winners (a whopping one million naira) but also because it affords the budding talents the opportunity to be seen by millions of people across the world.

Hear 9 inspiring talks, meet the best product people in Europe, and party together after the event!

Add skills to your your product toolkits with one of our specialised workshops.

Breakfast, lunch, snacks and unlimited tea and coffee are all part of the ticket price – included!

Captivate Visitors, Wherever They Are

With music and dance and lots of fireworks, the 2018 edition of One Lagos Fiesta came to a grand finale on New Year’s Eve, with Lagos governor joining nearly one hundred thousand people to ring in the new year at the Eko Atlantic City centre.

More than twenty top Nigerian musicians, including Tiwa Savage, Burna Boy, Sound Sultan, Olamide and Timaya performed on the night to the delight of the ecstatic crowd. More people watched the event online and on TV as other centres in Agege, Badagry, Epe and Ikorodu parties into the early hours of the new year in their respective centres.

Part of the major highlights of the night was when Governor counted down the old year and flagged up the new one with breathtaking fireworks that lit up the Lagos skyline. The winners of Lagos Grows Talent were also selected on the night while a winner for the raffle draw who won a brand new car was chosen as well.

There are no secrets to success. It is the result of preparation, hard work, and learning from failure.